Day 01 ARRIVE DELHI
Company representative will receive you on arrival at the international airport in Delhi late in the night or midnight. Transfer to your hotel. Relax.

DELHI, the capital of kingdoms and empires is now a sprawling metropolis with a fascinating blend of the past and the present. It is a perfect introduction to the composite culture of an ancient land.
Overnight at hotel.

Day 02 DELHI
After breakfast, start a full-day tour of Old and New Delhi.

OLD DELHI - A sight-seeing tour of Old Delhi would entail visiting the Raj Ghat - the memorial site where Mahatma Gandhi was cremated; Jama Masjid - the largest mosque in India and the Red Fort - once the most opulent fort and palace of the Moghul Empire.

NEW DELHI - An extensive sight-seeing tour of New Delhi would include a visit to the Humayun's Tomb, the Qutub Minar, a drive along the ceremonial avenue - Rajpath, past the imposing India Gate, Parliament House, the President's Residence and would end with a drive through the Diplomatic Enclave.
Overnight at hotel.

Day 03 DELHI / VARANASI
In the morning transfer to airport to connect flight for Varanasi. Met on arrival in Varanasi and transfer to hotel.
VARANASI, known to the devout as Kashi, is said to have been founded by Shiva, Lord of the Universe. One of the oldest living cities in the world, as also one of the most important pilgrimage sites in India, Varanasi is a major tourist attraction. Situated on the banks of the sacred Ganges, the city has been a centre of learning and civilisation for over 2000 years.

After hotel check-in, excursion to Sarnath, the spiritual centre of Buddhism.
SARNATH, once of the most sacred places for Budhhist, where Lord Buddha gave first sermon after attaining enlightenment. Visit famous Dhamaekha Stupa, Moolgandha Kuti Vihar and famous Sarnath museum having rich collection of antiques from Ancient India.
Overnight at hotel.

Day 04 VARANASI / KHAJURAHO
Visit to Dasaswamedh Ghat early in the morning and take a boat ride on the sacred river Ganges to see the cremation Ghats and witness the living traditions of one of the world's oldest and most important religions. (Start at 0500 hrs. for the best lifetime experience) For you to appreciate this remarkable city, transfer to the banks of the River Ganges before the sun rises. Board a boat with your guide and proceed to the middle of the river, where at sunrise the sight unfolds before you. Thousands of faithful come daily to the banks to bathe and pray while in the background, temples and palaces rise in tiers from the water's edge. Return for a walk through the cobblestone streets along the banks of "Ganga". As shops are opening, the place now becomes a beehive of activity as the faithful are coming and going.

Return to hotel and later fly to Khajuraho.
KHAJURAHO is well known for its magnificent temples, were built between 950 and 1050 A.D. Khajuraho derives its name from the Khajur tree (the date palm tree) which can be found in abundance in the area.The divine sculptures in these temples, are a tribute to Life itself, embodying everything that is sublime and spontaneous about it. The murals depict the life and times of the Chandelas, and celebrate the erotic state of being. They not only testify to the mastery of the craftsman, but also to the extraordinary breadth of vision of the Chandela Rajputs under whose reign, these temples were constructed.
After check-in visit the Eastern group of temples.
Overnight at hotel.

Day 05 KHAJURAHO / BANDHAVGARH
After breakfast, visit Western group of Temples. Later drive to Bandhavgarh Check in at Bandhavgarh Jungle Lodge.
BANDHAVGARH NATIONAL PARK:Set amongst The Vindhya Hills in Madhya Pradesh, Bandhavgarh consists of 168 sq miles of Sal & a mixed forest with large stretches of Bamboo and Grassland to The North. One is generally lucky to view The Tiger, Gaur ( Indian Bison) Chital, Chansingha ( Four horned antelope). This Park houses some 150 species of birds including the Blue Bearded bee eaters, White Browed Fantails, and The Malabar Hornbill. The Bandhavgarh Fort , besides offering breath taking views, houses a 35 ft reclining statue of Lord Vishnu and 10th Century Rock Images of the incarnation of the Lord.
Overnight at Bandhavgarh Jungle Lodge.

Day 08 BANDHAVGARH / KANHA
Morning game rides in the jungle After breakfast, drive to Kanha Arrive Kanha and check in at Kanha Jungle Lodge.

Day 09 KANHA
Early morning game rides by 4x4 open jeep in the Park. Rest
of the morning at leisure. Late afternoon game rides in the park.

Day 10 KANHA / NAGPUR / KOLKATA
After breakfast drive to Nagpur to catch flight for Kolkata, the capital of West Bengal.
Arrive Kolkata and transfer to hotel.
Over night at hotel.

Day 11 KOLKATA / GUWAHATI (or JOTHAT) / KAZIRANGA
Morning fly to Guwahati (or Jorhat).Arrive Guwahati and drive to Kaziranga National park, famous as the only natural habitat of the Great Indian Rhinoceros.
KAZIRANGA NATIONAL PARK:Located on the banks of the mighty Brahmaputra River in the far North East of India, Assam, Kaziranga National Park covers an area of approximately 430-sq-kms with its swamps and tall thickets of elephant grass making it the ideal habitat for the Indian One-Horned Rhino. Due to limitless poaching of this prehistoric survivor, the Kaziranga National Park was declared a wildlife sanctuary in 1940. 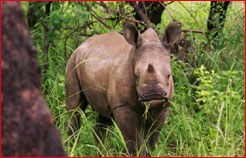 Day 12 KAZIRANGA
Morning and evening jungle rides, either Jeep safari or an Elephant safari or nature walks to observe the wildlife in Kaziranga National Park. Either opt for safari in the Western Range followed by lunch or then take another safari trip in the Central Range or safari tour in either of these two ranges followed by safari tour in the Eastern Range.

Day 14 KAZIRANGA / GUWAHATI / DELHI
After breakfast drive to Guwahati airport to take flight to Delhi, arrive Delhi and after farewell dinner transfer to the International airport for return flight. If your return flight is late in the evening we would be organizing a hotel for day use which can be used for relaxing
Later transfer to the International Airport to catch a flight for your onward destination.