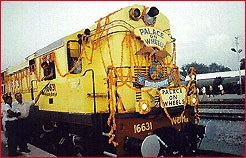 1600 hours: Self arrive at Delhi Cantonment Railway Station for check in and board Palace On Wheels maharaja train tour.
1745 hours: Departure for the adventure of a lifetime.
2000 hours: Dinner on board.

Famous as "The Pink City", Jaipur, is the capital of Rajasthan. Jaipur has witnessed the splendor of the Rajput and Mughal royalty and its monuments are the living testimonies of the magnificence of that era. Visit the Hawa Mahal - Palace of Winds - with a profusion of windows and stone screens. The Jantar Mantar is the 18th century stone observatory. Behold the stunning architecture of the City Palace and the Amber Fort. 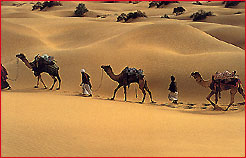 Jaisalmer is the land of ancient sandstone "Havelis" (mansions). The attractions of this 12th century city comprise of monuments that have retained their age-old style and character. A fourth of the city's residents still reside within the walls of the Jaisalmer Fort. Famous for its latticed windows and balconies, the Patwon ki Haveli is the most magnificent mansion. Visit the three-hundred-year-old Salim Singh ki Haveli. The Gadsisar Sagar Tank is a scenic lake enveloped by lovely shrines and archways.

1300 hours: Lunch on board and rest.
1700 hours: Visit the sand dunes and experience the thrill of a camel safari.
1930 hours: Dinner while enjoying a cultural programme.
2300 hours: Departure for Jodhpur. 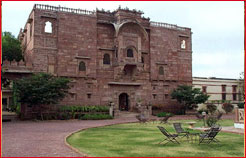 The old Jodhpur city, founded by Rao Jodhaji in 1459 AD, is encircled by a ten kilometer long wall having eight gates that serve as entrances. The new city is settled around this walled area. Jodhpur is a fine blend of modern and traditional buildings.
Housed within the Mehrangarh Fort are the famous palaces, Moti Mahal and Phool Mahal. Jaswant Thada is the 19th century royal cenotaph, which is constructed out of thin sheets of white marble that allow the sun to filter through. A portion of the Umaid Bhawan Palace has been converted into a museum. The architectural
splendors of these remnants will enthrall you.

Sawai Madhopur is the gateway to the Ranthambhor National Park, the famous Tiger Reserve. The reserve has a variety of diverse wildlife, including the Indian tiger, hyena, nilgai, wild boar, fox and over three hundred species of birds. Built in 994 AD, the Ranthambhor Fort still has ruined pavilions, walls, chhatris and impressive monuments.

Chittaurgarh was the abode of passionate men and women whose courage and dignity have become legendary. The Chittaurgarh Fort, built in the 7th century, has many vestiges of heroism. Padmini's Palace is also situated in the fort. Visit the Vijay Stambh (Tower of Victory) and the Kirti Stambh (Tower of Fame).

Udaipur has come to be known as the "Venice of the East". The rugged fortresses, charming palaces, sandy terrain, lakes and forested hills brimming with wildlife will become a part of your most cherished memories. The Lake Palace and Jag Mandir are situated amid the Lake Pichola. Also explore the City Palace and Sahelion ki Bari.

Begin your morning with a visit to the eternal symbol of love, the Taj Mahal. Dressed in white marble, this splendid monument was built in the 17th century by the Emperor Shah Jahan in memory of his beloved wife, Mumtaz Mahal.

Continue your journey with sightseeing in Agra before departing for Bharatpur. You are served with Lunch on board.

Afternoon .. Bharatpur Bird Sanctuary
In the afternoon, you arrive at Bharatpur. It is known for the Keoladeo Ghana National Park, which is the home to a large variety of exotic birds that fly in from the distant lands of Siberia and China.

In the night we depart for Delhi.

Dinner is served on board.

Day 08 : Delhi
Welcome back to Delhi Cantonment Railway Station to step back from fantasy to reality.

Note :- While the royal train arrives at the platform by 0500 hours you can disembark after breakfast till 0745 hours.