Day 01 : ARRIVE-DELHI
Our company representative will receive you on your arrival at the international airport.
Transfer to the hotel.

Since, most international flights into Delhi land between late evening/midnight and early morning, the touring activities are scheduled only from the following day.

Delhi, the capital of kingdoms and empires is now a sprawling metropolis with a fascinating blend of the past and the present. It is a perfect introduction to the composite culture of an ancient land.
Overnight at hotel.

Day 02 : DELHI
After a leisurely breakfast embark on a sightseeing tour of New Delhi where ornate buildings recall the days when India was the Jewel in the crown of the British empire. Visit the 11th century Qutab Minar Tower, the India Gate and the grand government buildings, the President's House and Parliament House all dating back to the time of British Raj. The imperial city of New Delhi generates a mesmerizing charm reflecting well-composed and spacious streets under the shade of imposing government buildings.
Overnight at the hotel.

Day 03 : DELHI-JAIPUR
After a leisurely breakfast embark on a sightseeing tour of New Delhi where ornate buildings recall the days when India was the Jewel in the crown of the British empire. Visit the 11th century Qutab Minar Tower, the India Gate and the grand government buildings, the President's House and Parliament House all dating back to the time of British Raj. The imperial city of New Delhi generates a mesmerizing charm reflecting well-composed and spacious streets under the shade of imposing government buildings.
Overnight at the hotel.

Day 04 : JAIPUR
After breakfast, excursion to Amber Fort. Elephant ride from the foothills of the Aravallis to the fort entrance. Amber Fort : At a distance of 11 kms from Jaipur, Amber was the ancient capital of Jaipur state. Construction of the fort began in 1592 by Raja Man Singh, the Rajput commander of Akbar's army and is a superb example of Rajput architecture.
Afternoon, city tour of Jaipur. Visit the City Palace which has museum having an extensive collection of art, carpets, enamel ware and weapons; Jantar Mantar - the observatoyr built my Maharaja Jai Singh in 1728 and the façade of Hawa Mahal.
Overnight at hotel. 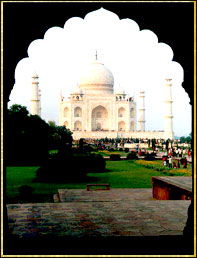 Fatehpur Sikri:The deserted, red Sandstone City, Emperor Akbar built that as his capital and palace in the late 16th century is an exhilarating experience. It a veritable fairytale city and its "ruins" are in pristine condition ... it's not hard to imagine what the court life must have been like in the days of it's grandeur. Also visit the Buland Darwaza, the largest gateway in the world.

On arrival in Agra, check in at the hotel.

Agra: Two great Mughal monarchs, Akbar and Shah Jahan, transformed the little village of Agra into a befitting second capital of the Mughal Empire - giving it the name Dar-ul-Khilafat {seat of the Emperor}. Today a visitor to Agra is caught up in a world of contrasting edifices, of red sandstone and white marble, narrow galleys and quaint buggies, and that irresistible charm that this favorite city of the Mughals still retains. It is not surprising, that modern Agra still reflects its Mughal heritage most conspicuously.

Afternoon city tour of Agra including a visit to the world famous Taj Mahal, Red Fort.

TAJ mahal: Little needs to be said about this architectural wonder which is always the soul raison-de-etre for every tourist's visit to Agra. Built by Shah Jahan, the Taj is a white marble memorial to his beautiful wife Mumtaz Mahal. This monument took 22 years to be completed and was designed, and planned by Persian architect Ustad Isa. Apart from its stunning design balance and perfect symmetry, the Taj is also noted particularly for its elegant domes, intricately carved screens and some of the best inlay work ever seen.
Overnight at hotel. 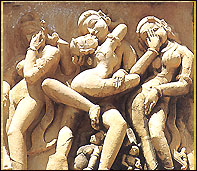 Day 06 : AGRA-JHANSI-KHAJURAHO
Breakfast will be at hotel. You will be transferred to station for train to Jhansi.

Reach Jhansi and proceed to Orchha, 12 km away. Proceed for sightseeing of ORCHHA sites within the Fort Complex. Enjoy your lunch at Orchha. Continue drive to Khajuraho.Reach Khajuraho. Transferred to hotel and relax. Evening will be free or you can go out for a stroll.

Khajuraho is well known for its magnificent temples, were built between 950 and 1050 A.D. Khajuraho derives its name from the Khajur tree (the date palm tree) which can be found in abundance in the area.The divine sculptures in these temples, are a tribute to Life itself, embodying everything that is sublime and spontaneous about it. The murals depict the life and times of the Chandelas, and celebrate the erotic state of being. They not only testify to the mastery of the craftsman, but also to the extraordinary breadth of vision of the Chandela Rajputs under whose reign, these temples were constructed.
Overnight will be at Khajuraho.

Day 07 : KHAJURAHO
After B/fast Visit the Eastern and Western Group of temples.

The world famous Khajuraho temples were built by the Chandela kings between 950 AD and 1050 AD. The most important are the Chaunset Yogini Temple dedicated to Goddess Kali, The Mahadev Temple, Chitragupta or Bharatji Temple with a lovely image of 11 headed Vishnu, Vishvanath and Nandi Temples, Lakshmana Temple, Visha Temple of Shiva, which is the largest & most typical of temples. Visit the Eastern group of temples that consist of the Parasvanath Temple - the only Jain Temple surviving at Khajuraho and has excellent sculptures on the outer walls of the Sanctum, the Javeri Temple dedicated to Vishnu. The other temples in this group are those dedicated to Brahma, Yamuna and Adinath.
Overnight will be at Khajuraho.

Day 08 : KHAJURAHO-VARANASI
Morning at leisure. Later, transfer to the airport for flight to the holy city of Varanasi.

On arrival, transfer to the hotel.

Varanasi, known to the devout as Kashi, is said to have been founded by Shiva, Lord of the Universe. One of the oldest living cities in the world, as also one of the most important pilgrimage sites in India, Varanasi is a major tourist attraction. Situated on the banks of the sacred Ganges, the city has been a centre of learning and civilisation for over 2000 years. 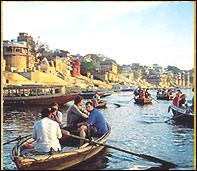 Day 09 : VARANASI
Drive to Dasaswamedh Ghat early in the morning and take a boat ride on the sacred river Ganges to see the cremation Ghats and witness the living traditions of one of the world's oldest and most important religions. (start at 0500 hrs. for the best lifetime experience) For you to appreciate this remarkable city, well transfer you to the banks of the River Ganges before the sun rises. Board a boat with your guide and proceed to the middle of the river, where at sunrise the sight unfolds before you. Thousands of faithful come daily to the banks to bathe and pray while in the background, temples and palaces rise in tiers from the waters edge. Return for a walk through the cobblestone streets along the banks of "Ganga". As shops are opening, the place now becomes a beehive of activity as the faithful are coming and going.

In the afternoon excursion to Sarnath, once of the most sacred places for Budhhist, where Lord Buddha gave first sermon after attaining enlightenment. Visit famous Dhamaekha Stupa, Moolgandha Kuti Vihar and famous Sarnath museum having rich collection of antiques from Ancient India.
Overnight at Varanasi.

Day 10 : VARANASI-DELHI
Breakfast will be served at the hotel. Relax in the morning. Later proceed to the airport for flight to Delhi.

On arrival in Delhi transfer to the hotel.

Day 11 : DELHI / ONWARD JOURNEY
On time transfer to airport to board flight for home.


Book this Tour
Customize this Tour