Day 01 ARRIVE DELHI
Company representative will receive you on arrival at the international airport in Delhi late in the night or midnight. Transfer to your hotel. Relax.

Delhi, the capital of kingdoms and empires is now a sprawling metropolis with a fascinating blend of the past and the present. It is a perfect introduction to the composite culture of an ancient land. Overnight at hotel.

Day 02 DELHI
After breakfast, start a full-day tour of Old and New Delhi.

Old Delhi - A sight-seeing tour of Old Delhi would entail visiting the Raj Ghat - the memorial site where Mahatma Gandhi was cremated; Jama Masjid - the largest mosque in India and the Red Fort - once the most opulent fort and palace of the Moghul Empire.

New Delhi - An extensive sight-seeing tour of New Delhi would include a visit to the the Qutub Minar, a drive along the ceremonial avenue - Rajpath, past the imposing India Gate, Parliament House, the President's Residence and would end with a drive through the Diplomatic Enclave.

Overnight at hotel in Delhi.

Day 03 DELHI / JAIPUR
After breakfast and check out drive to drive to Jaipur.

Jaipur: The capital city of the state of Rajasthan, also know as "Pink City" owes its name, its foundation and planning to the great warrior astronomer Maharaja Jai Singh II. The city of Jaipur has broad avenues. The city sits on a dry lakebed in a wild and somewhat arid landscape, surrounded by barren hills surmounted by fortresses and crenellated walls.
On arrival at Jaipur, Check into hotel.

Rest of the day at leisure or to explore Jaipur. Visit to local Johri Bazaar-famous for jewellery ( At option ) . Overnight at Jaipur.

Day 04 JAIPUR
After breakfast proceed for excursion to the Amber Fort. Ride to the Fort on elephant back in a royal manner.

Amber Fort Palace - Amber is the classic romantic Rajasthani fort palace. Its construction was started by Man Singh I in 1592, and completed by his descendent Jai Singh I. Its forbidding exterior belies an inner paradise where a beautiful fusion of Mughal and Hindu styles finds it's ultimate expression.

City Palace - A delightful blend of Mughal and traditional Rajasthani architecture, the City Palace sprawls over one-seventh of the area in the walled city. It houses the Chandra Mahal, Shri Govind Dev Temple and the City Palace Museum.

Jantar Mantar - This is the largest and the best preserved of the five observatories built by Jai Singh II in different parts of the country. This observatory consisting of outsized astronomical instruments is still in use.

Hawa Mahal - The ornamental facade of this "Palace of Winds" is a prominent landmark in Jaipur. Their five-storey structures of sandstone plastered pink encrusted with fine trelliswork and elaborate balconies. The palace has 953 niches and windows.
Overnight at Jaipur.

Day 05 JAIPUR / BHARATPUR
After breakfast and check out drive to Bharatpur for a tour of the world famous bird sanctuary- Bharatpur Bird Sanctuary.

Keoladeo National Park previously known as Bharatpur Bird Sanctuary. If Taj Mahal is "rhapsody in marble" then definitely Keoladeo is a "ballad of birds". Located at the confluence of Gambhir and Banganga rivers and spread over 29km2 of shallow lakes and woodlands, Keoladeo National Park provides shelter to over 300 avian species, particularly during winter when the resident numbers multiply as a result of migrants. The freshwater swamp with the picturesque Kadam trees, stands of Acacia and profuse aquatic vegetation, is a habitat of various living organisms, which serve as food for the different species of animals. Two-thirds of the birds listed in Keoladeo are land birds while one-third of the species are water birds. Pintails, teals, mallards, pochards, geese, coots, storks, curlews and sandpipers can be seen in the lake; the heronry at Keoladeo is indeed one of the finest in the world, with 14 species nesting and breeding in the Park.

On arrival at Bharatpur , check into hotel. Later birdwatching trip in Park. Overnight at hotel.

Fatehpur Sikri - The Red Sandstone City, Emperor Akbar built as his capital and palace in the late 16th century. Also visit the Bulund Darwaza, the largest gateway in the world.

Continue your drive to Agra.

Agra - Badal Singh established the city of Taj in 1475 AD. Agra finds mention in the Mahabharat as Agraban. Sikandar Lodi made Agra his capital but Babur defeated the Lodis to capture not only Agra but also laid the foundation of the Mughal Empire. In the mid 16th century and earlier 17th century AD, Agra witnessed a frenzied building activity and it was during this time when the symbol of love Taj Mahal was built.

On arrival at Agra, pick up and transferred to hotel. Later sightseeing of Agra covering Agra Fort and Mausoleum of Itmad-Ud-Ula. Agra Fort, a massive structure with 70 foot high, 1.5-mile long walls encompassing an astounding collection of well preserved buildings, many of them completed during the reign of Emperor Shah Jahan.

Visit to Taj Mahal By Sunset.
Taj Mahal: Little needs to be said about this architectural wonder which is always the soul raison-de-etre for every tourist's visit to Agra. Built by Shah Jahan, the Taj is a white marble memorial to his beautiful wife Mumtaz Mahal. This monument took 22 years to be completed and was designed, and planned by Persian architect Ustad Isa. Apart from its stunning design balance and perfect symmetry, the Taj is also noted particularly for its elegant domes, intricately carved screens and some of the best inlay work ever seen.

Day 07 AGRA-JHANSI-KHAJURAHO
Breakfast will be at hotel. You will be transferred to station for train to Jhansi.
Bhopal Shatabadi
Leaves Agra at 0815hrs & arrives Jhansi at 1040hrs
Reach Jhansi and proceed to Orchha, 12 km away. Proceed for sightseeing of ORCHHA sites within the Fort Complex. Enjoy your lunch at Orchha. Continue drive to Khajuraho.Reach Khajuraho. Transferred to hotel and relax. Evening will be free or you can go out for a stroll.

Khajuraho is well known for its magnificent temples, were built between 950 and 1050 A.D. Khajuraho derives its name from the Khajur tree (the date palm tree) which can be found in abundance in the area.The divine sculptures in these temples, are a tribute to Life itself, embodying everything that is sublime and spontaneous about it. The murals depict the life and times of the Chandelas, and celebrate the erotic state of being. They not only testify to the mastery of the craftsman, but also to the extraordinary breadth of vision of the Chandela Rajputs under whose reign, these temples were constructed.

Afternoon sightseeing of Eastern & Western groups of Temples. Overnight will be at Khajuraho.

Day 08 KHAJURAHO / BANDHAVGARH
After breakfast, visit Western group of Temples. Later drive to Bandhavgarh Check in at Bandhavgarh Jungle Lodge.
Bandhavgarh National Park:Set amongst The Vindhya Hills in Madhya Pradesh, Bandhavgarh consists of 168 sq miles of Sal & a mixed forest with large stretches of Bamboo and Grassland to The North. One is generally lucky to view The Tiger, Chital, Chansingha ( Four horned antelope). This Park houses some 150 species of birds including the Blue Bearded bee eaters, White Browed Fantails, and The Malabar Hornbill. The Bandhavgarh Fort , besides offering breath taking views, houses a 35 ft reclining statue of Lord Vishnu and 10th Century Rock Images of the incarnation of the Lord.
Overnight at Bandhavgarh Jungle Lodge. 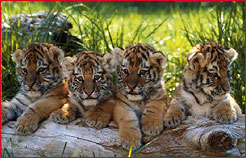 Day 14 KANHA / NAGPUR / MUMBAI
Proceed for the morning game drive in to the park. And later proceed to Nagpur to board flight for Mumbai.
Jet Airways ; 9W116
Leaves Nagpur at 2130hrs & arrives Mumbai at 2250hrs
Overnight at hotel.

Day 15 MUMBAI
In the morning transfer to airport to connect flight for Mumbai. Met on arrival in Mumbai. Morning: ferry to explore Elephanta Caves, Elephanta Caves - The rock-cut Hindu temples at Elephanta, an island 6 miles across the harbour provide an exciting glimpses of Indian sculpture dating from 600 AD. Huge panels depict episodes relating to Lord Shiva, the central one being the most imposing one - a five metre bust of the God, represents his three aspects as creator, preserver and destroyer. Motor-launch takes about an hour to reach the island where the caves are situated.

Afternoon: City tour of Mumbai including Gateway of India, Prince of Wales Museum and Kamla Nehru Park, then ascend the slopes of Malabar Hill with its Hanging Gardens for a panoramic view.

Evening transfer to the airport for onward international flight.